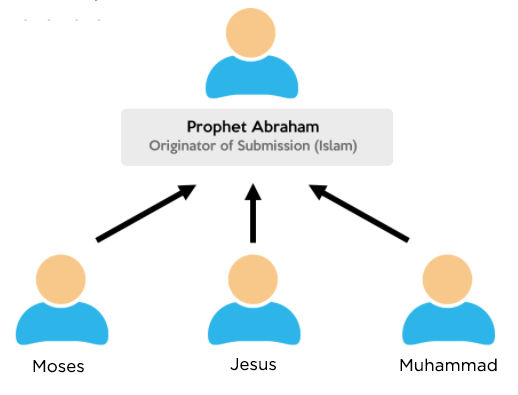 Abraham was the founding father of Submission (Islam)

Contrary to popular belief, the religion of Submission (Islam) did not begin with Muhammad but rather with Abraham.

Muhammad was specifically told to follow the religion of Abraham

Muhammad’s sole mission was to deliver the message (the Quran)

The Quran is complete in truth and justice

Since God says the Quran is “complete” and He “left out nothing”, then followers must accept this and not argue that it is incomplete and therefore the hadith are necessary.

Origin of names of religions

Many people nowadays think of Judaism, Christianity, and Islam as three completely different religions that all originate from Abraham. However, Judaism and Christianity are actually just incorrectly modified versions of Islam (Submission).

Judaism is named as such because it originates from the Hebrew word Yehudah (Judah)”. Source

Judah is the name of an ancient kingdom in present-day southern Israel. Source

Christianity is named as such because it is based on the name of its leader, Jesus Christ. Christianity grew out of Judaism and began as a Second Temple Judaic sect in the mid-1st century. Source

Christ comes from the Greek word χριστός (chrīstós), meaning “anointed one”. The word is derived from the Greek verb χρίω (chrī́ō), meaning “to anoint.” In the Greek Septuagint, christos was used to translate the Hebrew מָשִׁיחַ (Mašíaḥ, messiah), meaning “[one who is] anointed”. Source

Unlike Judaism and Christianity, Islam (Submission) is not named after a kingdom such as Saudi Arabia or a person such as Muhammad. If it did, it might be called Saudi Arabianism or Muhammadism.

The Quran always references Jews and Christians as

The religion of Noah, Muhammad, Abraham, Moses and Jesus is the same

The message given to Noah, Muhammad, Abraham, Moses and Jesus was the same

Correct Jews, Christians and Muslims are all muslims who share the same God

“Deen” (religion) vs “millat” (ways / practices of a religion)

Many Muslims use verse 2:120 to infer that the Jews and Christians follow a different religion.

The word “deen” means “religion” whereas the word “millat”, in the context of verse 2:120, means “way of belief or form of religion.” According to the Edward Lanes Lexicon, we see this definition as follows:

The word “millat” is also in verse 16:123 where prophet Muhammad was told to follow Abraham’s “form of religion” (millat).

In other words, people can be part of the same “deen” (religion” but their way / form (“millat”) may be different. The correct way, according to verse 16:123, is the way of Prophet Abraham. This “way”, according to this verse, is to not join anything with God including partnerships, idols, and intercessors. This “way” applies to Muslims, Christians and Jews.