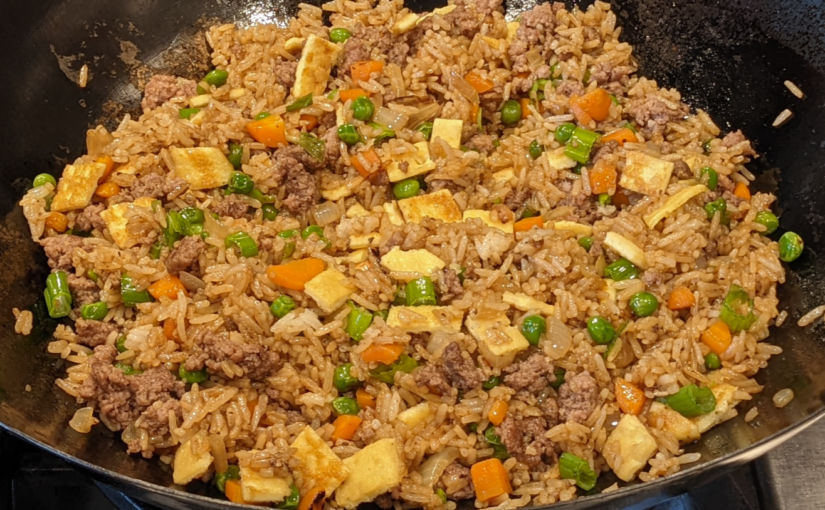 Make an omelette. Beat the eggs (I like to use a handheld electric mixer). Using a small pat of butter, make an omelette (I use a large pan for this). Slice the omelette into squares and set aside.

Cook the meat. I used ground beef. When done, set aside.

Sauté veggies. Using butter, sauté the onions, carrots, peas and garlic until soft and cooked through. (I use a wok for this)

Stir fry rice. Turn the burner to high heat. Scooch the veggies over to one side of the pan, melt the remaining butter in the other half, and add the chilled rice, soy sauce, and oyster sauce (if using). Then stir to combine with the veggies and continue sautéing the rice, stirring every 15-20 seconds or so for 3 minutes, or until you notice the rice and veggies starting to brown slightly.

Taste and season. Give the rice a taste, and season with MSG and pepper, plus any extra soy sauce or sesame oil, if needed.

To break up the rice, use a food masher utensil.

You can also just buy one of these spice packets to make things simple.

I’ll try to make fried rice using each of these spice packets and rate each one. 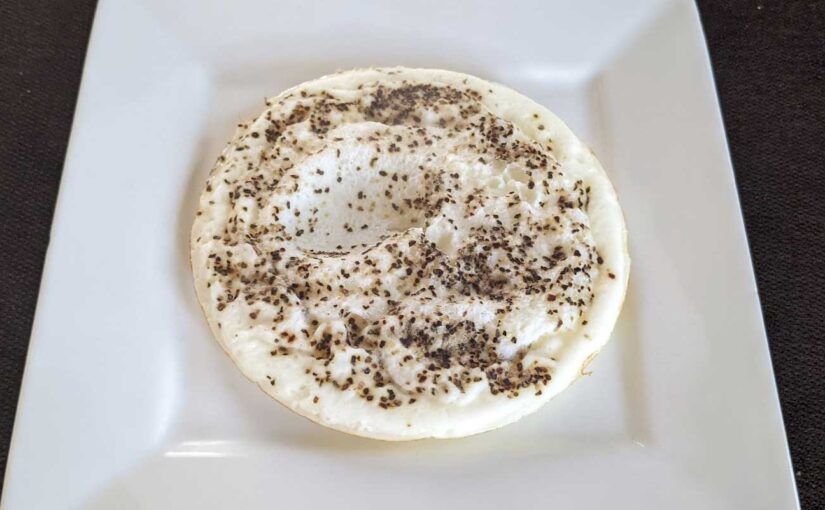 Eggs are some of the healthiest foods you can eat. And, they taste good and are very cheap. However, if you’re looking to lose weight while maintaining or building muscle mass, you probably should only eat egg whites instead of whole eggs. As you can see in the table below, most of the protein in a whole egg comes from the egg white and all of the fat comes from the yolk.

Cooking it is super simple. I prefer the set-and-forget method to create an egg white patty. Here’s the recipe. 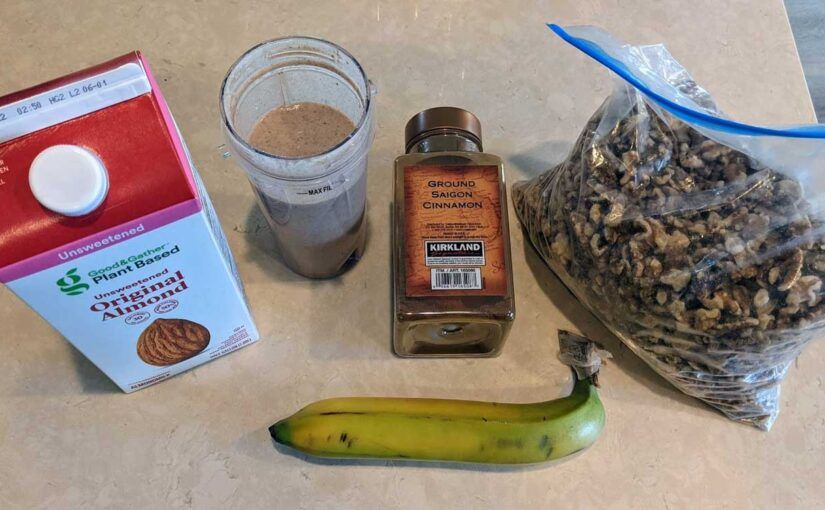 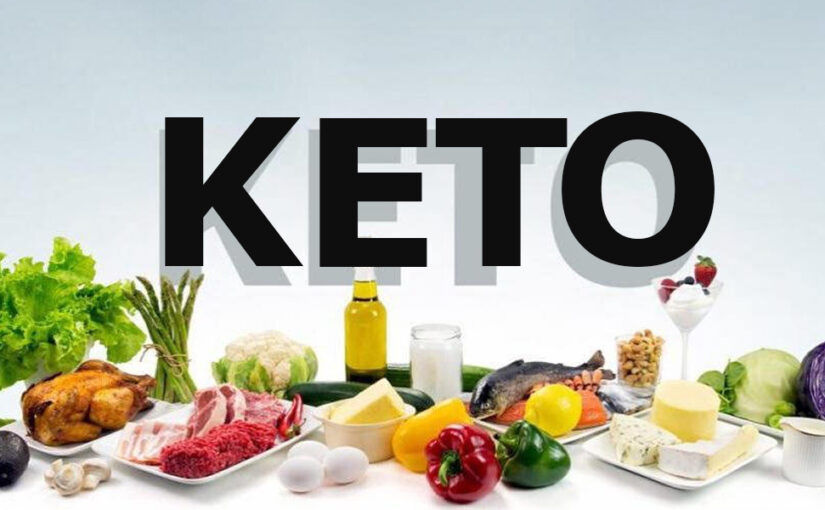 Alright, lately I’ve been obsessed with finding recipes and food for weight loss that I personally enjoy eating, especially Keto-friendly ones. To keep track of all my discoveries, I decided to just make this menu.

Microwave on high for 2 minutes (depending on microwave)

Cheese sticks are very low carb, but high in protein and calories. 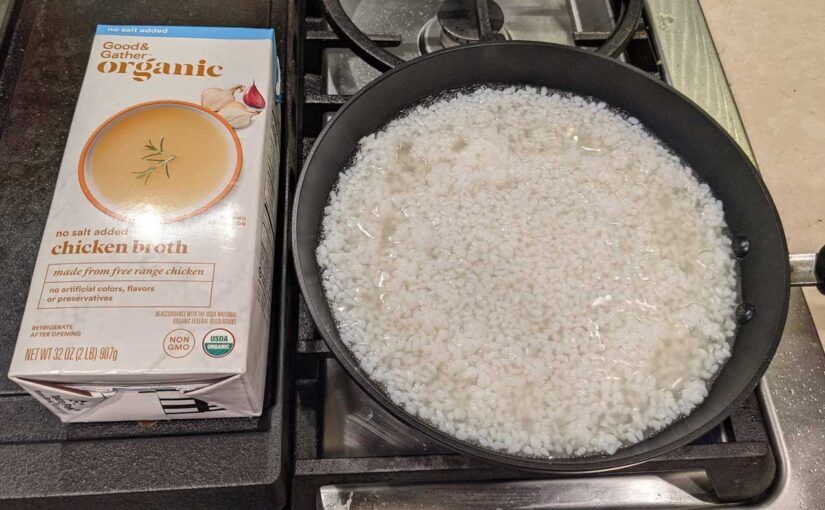 Just out of curiosity, I wanted to find the lowest calorie, lowest carb food that could be considered a dish/meal. The goal is to be able to lose weight while feeling full after eating something that is relatively tasty with a flavor that everyone is familiar with. When it comes to filling foods, most people would think of rice or bread. Apparently, there’s something very similar to rice called Konjac.

It has a neutral taste and its shape is very similar to rice. But, it does have a slightly different texture than rice. Nevertheless, one pack (150g) contains only 5 calories and 0 net carbs.

Of course, eating plain rice alone, especially Konjac rice, doesn’t taste good. After considering various ingredients to add to Konjac rice, I decided that chicken broth is one of the best flavorings to add. Everyone knows what chicken tastes like and since it doesn’t contain meat, even vegetarians can eat (drink) it. It’s also not a forbidden food by any of the major religions.

This particular brand of chicken broth is organic, doesn’t contain salt, provides a mere 5 calories for 1 cup, and has 0 carbs.

If we cook one pack of Konjac rice with 1 cup of this chicken broth, we’d only be consuming 10 calories and 0 net carbs! Since 1 pack seems too little to make me feel sufficiently full, I’ll go with 2 packs and 1 cup of chicken broth (15 calories total). That’s nothing! (calorie-wise)

The broth says “no salt added”. That may be good for people with high blood pressure but for me, the rice just didn’t taste good without salt so I added some. Here’s the finished dish.

I know it looks super boring and tasteless but since I added chicken broth, it actually tasted like chicken soup. On a scale of 1 (yuck) to 10 (yum), I’d give it a 7 (not bad). Of course, the only reason for eating this is to lose weight until you reach your target weight after which time you can adjust your diet so as to just maintain your weight.

Now, don’t go eating this for breakfast, lunch, and dinner!

So, if you eat this and nothing else, your body won’t be getting any of the essential nutrients it needs from fat and protein.

This ridiculously simple dish is good in combination with other food so that your total daily caloric intake is less than your calorie expenditure so that you can actually burn fat and lose weight, especially for people who don’t want to exercise in conjunction with dieting.

According to one calculator, my basal metabolic rate (BMR) or, calories I would burn each day by being sedentary / not active, is 1788. You need to burn 3,500 calories to lose 1 pound of body weight. So, if I was sedentary and could consume a max of 1288 calories per day (which is not easy to do considering how so many foods contain so many calories), then I could have a deficit of 500 calories per day and lose 1 pound of body weight per week or 10 pounds in 2.5 months.

If you’d like to eat Konjac rice with something else that is full of nutrients and is healthy, then you may want to try mixing the rice with scrambled eggs. One scrambled egg has 100 calories, 8g of fat, 7g protein, and 1g of net carbs.

Since we’re adding chicken broth to the Konjac rice, it would make sense to add real chicken as well. Pictured below I added pregrilled chicken breast from Costco. It tasted good and was super easy to make since everything was precooked.

Konjac rice is relatively expensive. For a cheaper alternative that still has much fewer carbs than rice, you can use riced cauliflower. 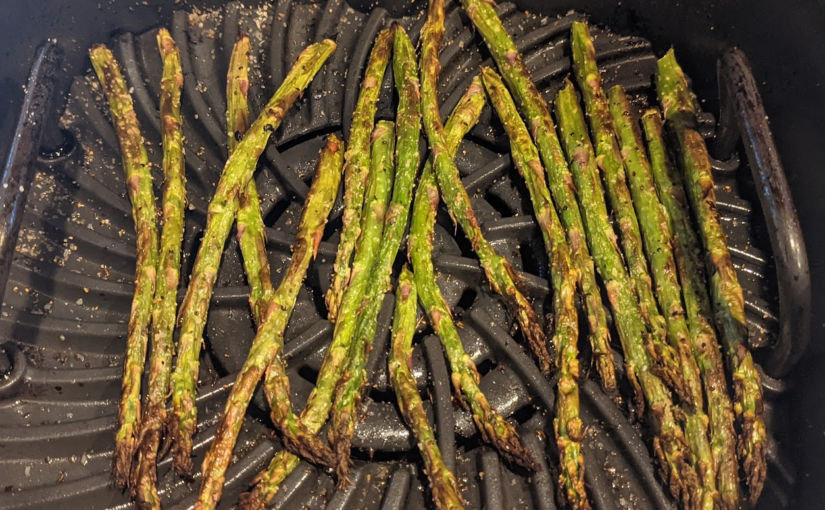 If you like grilled asparagus, here’s an easy way to make it without firing up the outside grill. 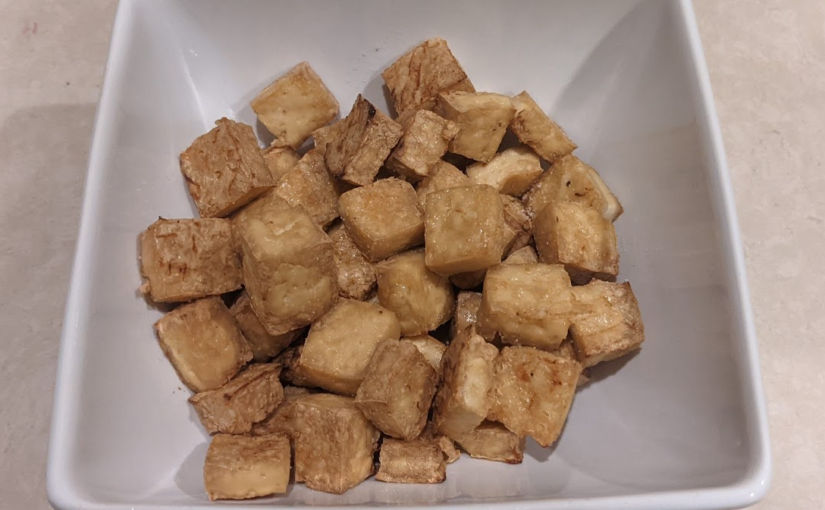 So, I’m currently trying this Keto diet which calls for low carbs. Since french fries are not low carb, I needed a substitute. Tofu seems to fit the bill thought it’s a lot more expensive that potatoes. Anyway, the one I’m eating is from Costco. It’s rated “Firm” with a rating of 4 out of 6 on the firmness scale. One pack contains 5 servings and each serving contains 70 calories and only 1g of net carbs (fiber doesn’t count). So, one pack contains 350 calories. 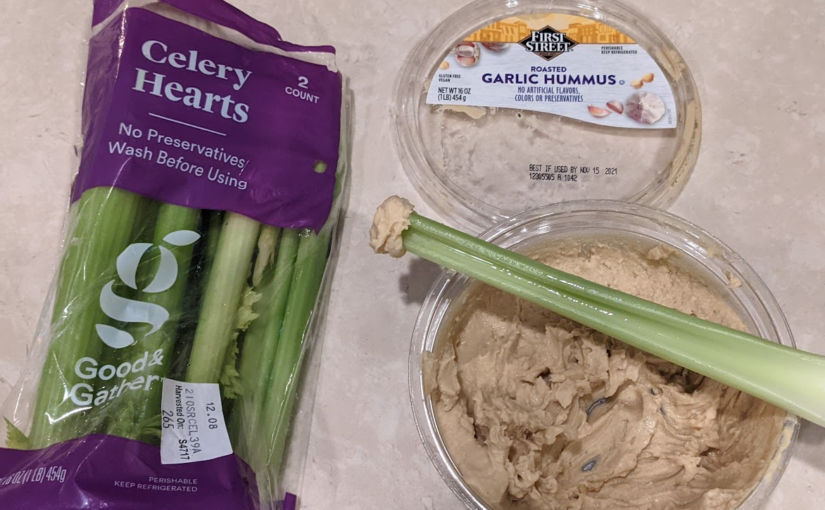 Many people will snack on something like potato chips. Personally, I prefer Ruffles Original. But, 160 calories from just 12 chips is unacceptable.

Here are some healthier and/or low calorie alternatives.

The hummus comes in at 60 calories per 2 tbsp. That seems like a lot but at least they are healthy calories rather than empty ones. Celery sticks are only 7 calories per stick and they mostly contains water.

This is an interesting type of food. It has the same amount of protein as meat. It often comes precooked so you just need to heat it up. Eating it involves removing the pod and eating the peas. The fact that you have to remove the pod can limit your consumption since it takes time. The taste is pretty neutral. Half a cup is only 94 calories. 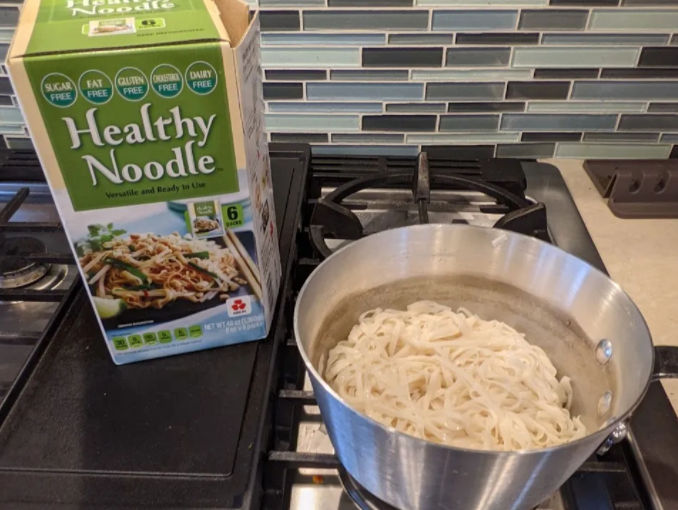 Pasta can be a very filling and tasty meal to have. But, the pasta itself is high in carbs and calories. For example, angle hair pasta (my favorite) has 200 calories per serving.

Fortunately, there are substitutes for pasta that taste almost exactly like pasta. For example, Costco sells Healthy Noodles. On the box, there’s a recipe for Italian Marinara using these healthy noodles. The noodles are precooked and each box contains 6 packs.

Nutrition-wise, they only contain 30 calories per serving. Plus, it’s got zero carbs because all of the carbs are from fiber which doesn’t get digested by the body and simply passes through. This is ideal if you are on the Keto diet.

Preparation is very easy. Just rinse the noodles and use them since they’re precooked. I tried this out with Rao’s marinara sauce and surprisingly, it tasted about 90% the same as regular pasta. I still prefer the taste of regular pasta, but for the calories saved by using Healthy Noodles, it’s worth the small difference in taste.

UPDATE: I actually tried making pasta with Miracle Noodle Angel Hair style noodles. The shape wasn’t like angle hair pasta at all but more like spaghetti. More importantly, the texture wasn’t particularly good. It was too sticky. I think the Healthy Noodle option above tastes better.

You can also Nasoya Pasta Zero spaghetti but like the Miracle Noodle Angel Hair style noodles, I didn’t care for the texture which tasted like rubber. 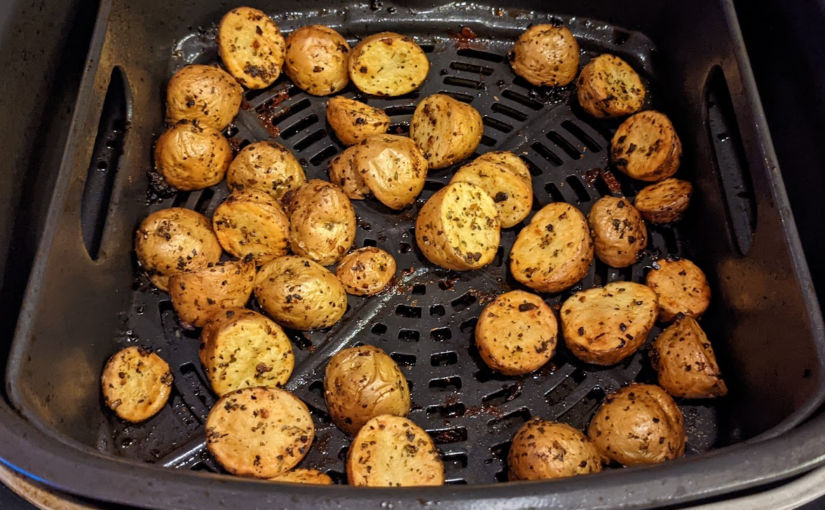 If you’re looking for a healthier alternative to French fries, here’s one.