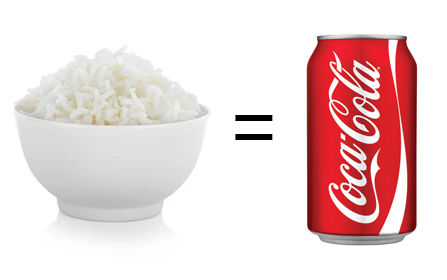 White rice is eaten by everyone all over the world. It’s probably the cheapest, most filling, readily-available type of food. Many people even have large plates of rice for breakfast. Though white rice may seem like an innocent, healthy food to eat, unlike sweets, it’s actually not healthy because it’s full of carbs which just gets converted into sugar in the body which leads to weight gain and health issues such as diabetes. So, just because white rice doesn’t taste sweet or look sweet, it’s just as bad as sugar. You might as well imagine you’re seeing sugar when you see white rice (or any carb like bread for that matter).

Now this should surprise you. One cup of white rice has more carbs (45 g) than that in a can of Coca Cola (39 g). So, when you eat rice, it’s not much different from drinking a can of soda.

If you a simple-to-cook, flavorful riced cauliflower meal, try Trader Joe’s Spicy Mexican-Style Riced Cauliflower. For $3, it’s cheap and personally, I found it to be very tasty. Optionally add some chicken breast for protein. It’s a bit spicy so if you can’t handle the spice, try the next option below.

I haven’t actually tried this yet but Shirataki Konjac Rice is extremely low in calories. At only 5 calories per 140 grams and 3 – 3 = 0 digestable carbs, it’s completely carb (sugar) free!