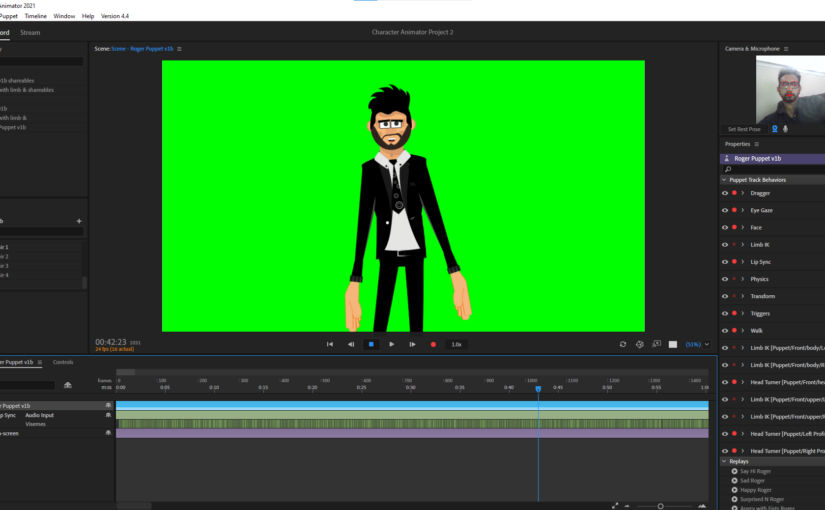 If you want to create a video of an animated character that moves its head and lips as you move your head and speak, you can do so easily using Adobe Character Animator. Here’s how.

For this example, I’m using a character / puppet called Roger from AnimationGuides.com.

Since we’ll want to overlay the exported character animation on other elements in a video editing program, we’ll want to add a green screen so we can key it out. Create a solid green image (RGB = 0,255,0) the size of the scene, e.g. 1920 x 1080. Then, import it and drag the imported item to the lowest layer it the Timeline panel.

We can tell Adobe Character Animator which parts of our face and body to track as we move and talk in the camera. Click on the puppet layer to reveal the Puppet Track Behaviors panel.

For the lip sync item, the red dot is by “Audio Input” so if you speak, the microphone will capture your voice and convert it into lip movements on your puppet.

Click the red record button. A 3 second countdown timer will begin. Start talking naturally and when you are done, click the red button again to stop recording.

You’ll then see some layers added to the timeline including your voice audio layer.

Now, your scene duration will just be the duration of the Work Area, in this case 5:20.

6. Preview and export the result

Click the play button to preview the recording. If you are happy with it. you can export it by clicking File > Export > Video via Adobe Media Encoder. This will open Adobe Media Encoder. In the Queue panel, choose a format (h.264) and preset (Match Source – High bitrate or YouTube 1080p Full HD). Then, click the green play button to start encoding.

You will see the encoding progress in the Encoding panel. You’ll also see the video duration as 5:21 seconds as that is the length of the scene in this example.